In facilities such as hospitals, schools and restaurants, diseases and illnesses can spread rapidly when not following proper cleaning procedures. These five Best Practices can help ensure that the unnecessary spreading of illnesses and diseases be eliminated.

Cross contamination is “the process by which bacteria or other microorganisms are unintentionally transferred from one substance or object to another, with harmful effect.” Unfortunately, cross-contamination can be prevalent in many standard cleaning procedures.

An example of this occurs when wiping down surfaces with traditional cotton cloths. This technique will
physically remove the dust and particles containing bacteria but will not work to capture it. Instead, some of the particles will be released into the air and the others will simply be transferred to the next surface where that cloth is used. Because of this, traditional cloths are only 30% effective in their cleaning efforts.

Another example of cross-contamination can occur when handling already soiled cloths and mops. When removing dirty mops from the mop holders with bare hands, it can be very likely that the germs will transfer from the mop onto the hands, which can then be transferred to the next surface the hands come into contact with.

Cross-contamination can be especially harmful in higher risk areas such as restaurants, hospitals and schools. In restaurants, for example, the person preparing the food may touch a surface where the harmful bacteria were not properly captured and then transfer the germs onto the food being prepared, potentially causing a foodborne illness. This is very common in the restaurant industry as there are almost 48 million cases of food-borne illnesses each year from ineffective cleaning. Along with restaurants, it is crucial in areas such as hospitals and schools to maintain germ-free surfaces as young children and sick patients can be at higher risks.

Fortunately, there are alternative cleaning methods to traditional cloths and mops. Microfiber is a great
method for removing harmful dust particles from surfaces. It is made up of tiny fibers, that can be one-hundred times finer than the human hair, allowing it to reach into cracks and crevices that otherwise would have been neglected with traditional cloths. Along with the ability to reach tight spaces, the microfibers are made up of positive charges which can work almost as a magnet with dust and particles (which are negatively charged) and completely capture them. Because of this, microfiber has a 99% effective rate in removing bacteria, in comparison to the 30% effective rate for traditional cloths mentioned above.

A pre-treat system is a very useful tool as well in preventing cross-contamination. The pre-treat system is a system that assists in ensuring that the exact amount of solution is absorbed into the microfiber mops or cloths and up to 20 microfiber products can be pre-treated per bucket. The pre-treated microfiber can then be used to clean one area and then be discarded into a laundry bag, without coming into contact with any other surfaces or unused cloths and mops, preventing any cross-contamination.
Another solution is the dual mop bucket. The dual mop bucket features two separate buckets for mopping – one for unused cleaning solution and the other for soiled solution. When using standard mop buckets, the solution can become immediately contaminated after the first rinse, as the soiled solution mixes with the clean solution. This only allows for 35% of the dirt, dust and particles to be removed from the floors. The dual mop bucket, however, is a lot more effective as only un-soiled, clean solution is used to clean the floors.

An additional helpful tool is the No-Touch mop holder. The No-Touch mop holder features a unique locking system with a button for the foot to step on in order to release the mop into a laundry bag without the need to touch the mop. This helps in preventing the transferring of the germs caused by removing the mop by hand. 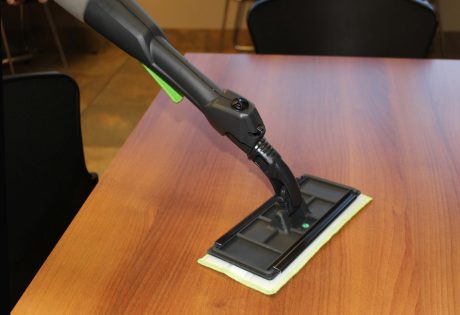 When it comes to cleaning, there are some high-traffic areas that are extremely difficult to maintain cleanliness as they are constantly being touched. Surfaces such as desks, door knobs, light switches, toilets and keyboards can come into contact with many germs that can be spread to each person touching the same surface. Germs for illnesses, such as the flu, can live on surfaces for more than two hours and be multiplied up to 6,000x in those two hours if not cleaned immediately.

In schools, this is a particularly large issue. Children may not always wash their hands and then proceed to touch many surfaces. Because of this, germs can spread rapidly and put the students at risk of illnesses. The common cold, for example, is often contracted through contaminated surfaces, and is responsible for 22 million school days lost annually.

While constantly cleaning these surfaces can seem to be an impossible task and very time-consuming, there are products on the market to make the maintenance of these surfaces much easier and more efficient. Microfiber is very helpful as it is can hold up to 8x its own weight, making it very absorbent, which allows it to capture many of the germs and reduce the number of trips necessary to wring out excess water and re-sanitize. Pad holders, when partnered with microfiber pads, are an excellent tool for cleaning surfaces quickly. There is a product on the market called the Cleano that has its own sanitization tank built-in. The Cleano comes in different sizes that can reach from 1’ up to 35’ and uses an articulated joint to enable swiveling so that the user can easily reach many surfaces that otherwise would be difficult to clean, without losing any flexibility. When using the Cleano and microfiber, labor can be reduced by 50%, which is very beneficial with keeping constant touch points clean and germ-free. 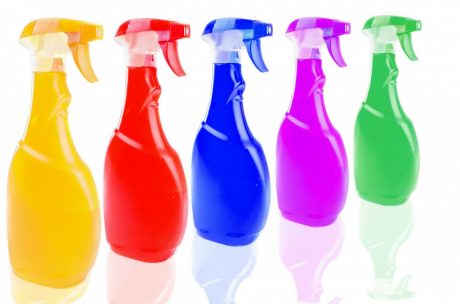 While chemicals can help with killing germs, the use of too many chemicals can lead to harmful effects. When too many chemicals are used, they can be inhaled, potentially causing illnesses; degreasers for example can lead to damage in the respiratory system, with possible health effects being lung cancer, chronic bronchitis, fibrosis or decreased oxygen in blood. Chemicals can have additional effects, such as induced asthma and allergic reactions that cause burns and irritations.
Luckily, products do exist to help with effectively cleaning with reduced or no chemicals on non-crucial
surfaces. The Cleano, for example, can clean windows and glass surfaces with zero chemicals as it uses a deionization system in a bottle to create purified water, which then can be used to clean glass streak-free. Microfiber cloths and mops, with their absorbency and innovative fine fibers for capturing particles, are able to be used with 95% less chemicals than traditional cloths and mops without losing effectiveness. Not only is the reduction in chemicals a safer method for cleaning, there is a significant reduction in costs associated with purchasing chemicals.

4. Make sure to clean all surfaces 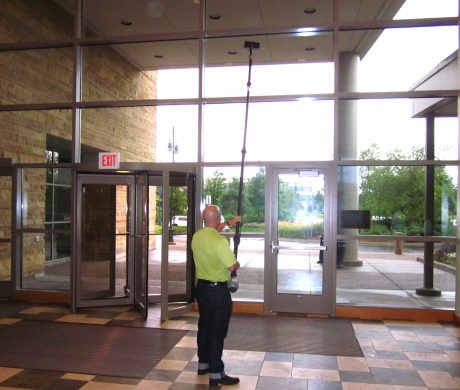 When cleaning facilities, it is very easy to miss surfaces that are not always visible. Examples include the top of tall furniture, the top of ceiling fans, light fixtures and above window sills. When neglecting these surfaces, dust build-up can start to create sinus and asthma issues and continuing to neglect these surfaces can cause inhalation irritation, which then can lead to more serious consequences.

Products, such as Microfiber Dusters, allow the operator to reach these surfaces easily with extended handles, without needing to use ladders or climbing on furniture to reach. The dust is then removed, creating a safer environment to breathe in.

The Cleano can prove to be very useful in this as well. Its height, with the ability of reaching up to 35′ with the use of poles, along with its flexibility and articulated joint, allows for the cleaning of difficult to reach surfaces at every angle.
Finally, there are a wide variety of tools for HEPA vacuums that can be used to extend into higher, hard-to reach areas, which then can extract the dust particles and keep the environment clean, all while being done safely from the ground. 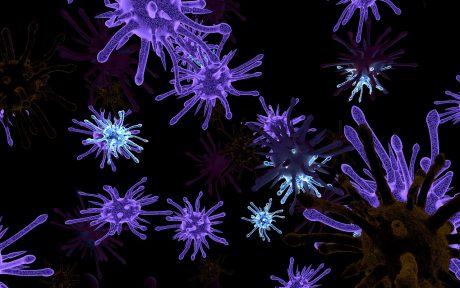 While surfaces are extremely important, germs can be spread throughout the air as well. Air can contain dust particles or respiratory droplets that contain bacteria and viruses that were released through a person’s sneezing or coughing. Healthy people then can then breathe in the air and become infected. Some diseases that are commonly spread via air include tuberculosis, chickenpox, norovirus and respiratory diseases.

Microfiber cloths are able to help with the elimination of airborne germs as well, because of their
absorbency. When dry-dusting with traditional cloths, the germs eventually will be released, contaminating the air and creating the risk of inhalation of the harmful bacteria. Microfiber, on the other hand, holds onto the particles and dust and can significantly reduce allergens and harmful bacteria in the air.
When following these five best practices, the spreading of illnesses can be significantly reduced. To learn more about products that can help improve your cleaning processes, click here to submit a Contact Request.